China’s 14th Five-Year Plan draft, which sets goals and strategies for developing the country’s economy until 2025, was unveiled last week.

QuoIntelligence analyzed the plan carefully. Check out our infographic for the key-takeaways or read the in-depth analysis focusing closely on self-reliance in technology, GDP / domestic growth, national security, etc. and its impact on cybersecurity and geopolitics.

For the first time, the Five-Year Plan did not set out GDP targets for the whole Five-Year period but allowed for annual target adjustments, setting a goal of at least 6 percent growth for 2021. Continuing on from the previous Five-Year Plan as well as the Made in China 2025 policy, technological self-reliance is central to the Plan as a tool for development and growth.

China’s Pursuit for Economic Independence from the US

In light of current geopolitical tensions, China aims to lessen its dependence on foreign suppliers. For example, in the face of US tariffs and trade restrictions, China seeks to promote domestic consumption by boosting Chinese-supplied components and technology and relying less on foreign inputs. Additionally, the Five-Year policy aims to bolster China’s national security system with an announced 6.8 percent rise in military spending.

For more details on China’s Five-Year Plan and our analysis scroll below the infographic.

Talk To An Expert 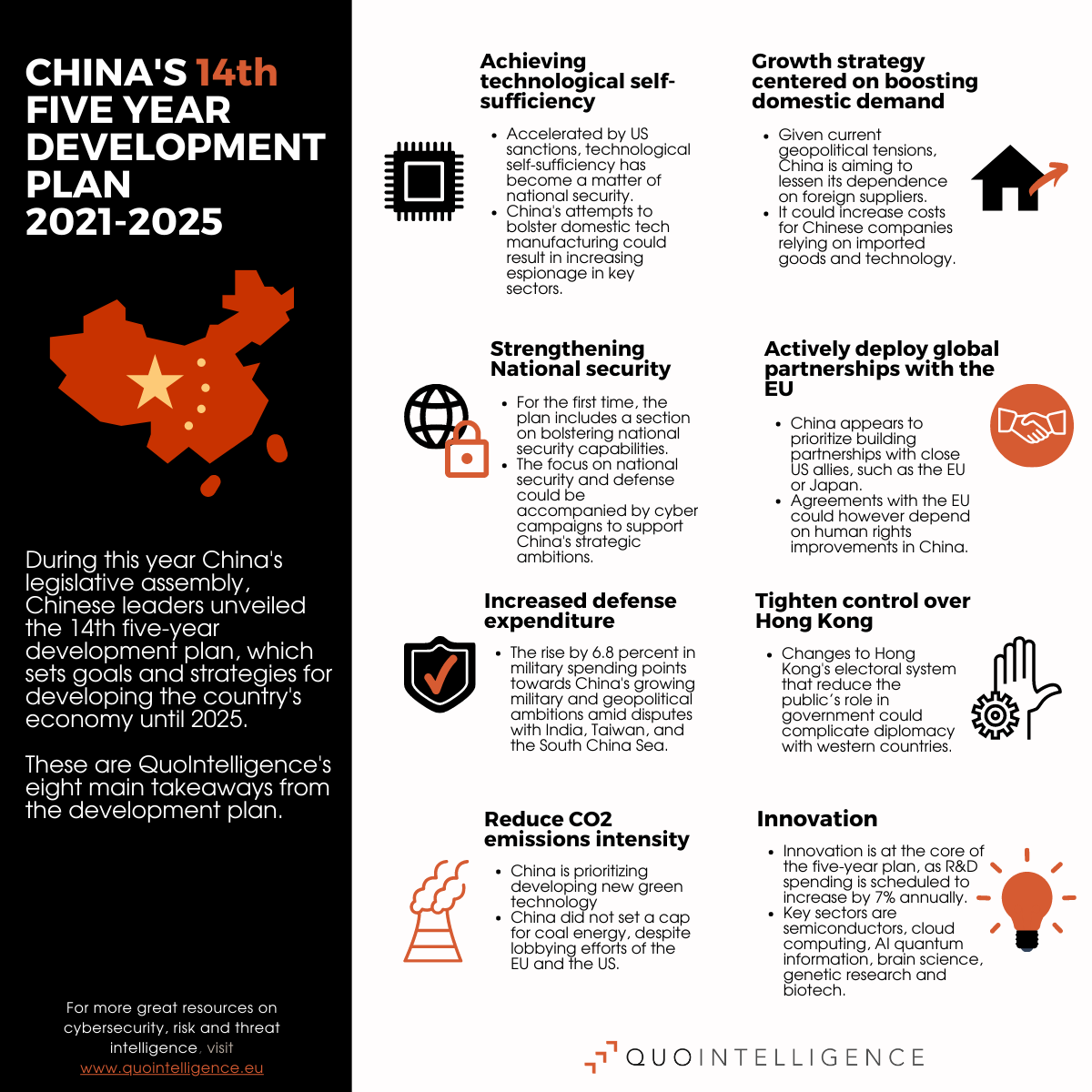 Key-Takeaways Through a Cybersecurity and Geopolitics Lense

From the perspective of cyber intelligence, international security, and geopolitics, the key-takeaways and potential implications from the 14th Five-Year Plan are:

Chinese leaders identified tech development as a matter of national security for the first time in a Five-Year Plan. This comes as a result of increasing pressure on trade, such as through US sanctions and tariffs, which impact China’s ability to rely on a stable supply of the technologies that help drive its economic growth.

The increased importance of tech development could lead to an increase in cyber industrial espionage as in the past, QuoIntelligence observed Chinese-linked Advanced Persistent Threat (APT) groups, like the Winnti Group, targeting companies in sectors of high interest to the Chinese government. Furthermore, China’s emphasis on developing alternative supply chains to counteract US sanctions will likely further exacerbate the ongoing tech race.

However, while governments around the world, including the US and EU, have expressed their interest in shortening supply chains and bolstering domestic production, the highly complex and globalized state of supply chains makes success unlikely over the short to medium term. Therefore, based on previous observations, China’s attempt to bolster domestic manufacturing could result in more industrial espionage campaigns and further deteriorate relations between the US and China.

China is trying to counter US tariffs by boosting domestic demand while also promoting the integration of the Chinese economy with the rest of the world. However, prioritizing the consumption of Chinese-made products across China could increase costs for Chinese companies relying on imported goods and technology and hinder growth objectives.

For the first time, the plan contains a special section for security development, aiming to bolster national security capabilities. The plan contemplates a 6.8 percent rise in military spending amid territorial disputes with India, as well as tensions with Taiwan and in the South China Sea, as well as ambitions to match the US and Russia in weapons technology.

The focus on national security and defense is likely to be accompanied by increasing cyber capabilities and campaigns to support China’s development and strategic ambitions. For example, the recent espionage campaign involving the Chinese-linked HAFNIUM group exploiting vulnerabilities in Microsoft Exchange servers to target research, defense, and policy-making groups across the US highlights this threat. A potential increase in government and military espionage points towards China’s growing focus on military and geopolitical ambitions.

Amid tensions with the US government, China appears to be prioritizing partnerships with nations regarded as close US allies. For example, China intends to finalize an investment treaty with the EU based on an agreement reached last December and China also aims to implement the China-Japan-South Korea free trade agreement.

China aims to reduce the amount of CO2 produced by 18 percent over the period 2021 to 2025. The prioritization of new and green technology might also result in increased industrial espionage, which would allow Chinese companies to accelerate the development of green products.

While the central government said it will ensure the implementation of the doctrine that guarantees Hong Kong’s high degree of autonomy, officials have announced changes to Hong Kong electoral system that will reduce the public’s role in government. This could complicate China’s relations with Western countries and potentially hinder trade agreements with the EU.

The Five-Year Plan provides an insight into China’s priorities in the coming years and can help countries and organizations forecast future challenges. The 2021-2025 Five-Year Plan positions technology innovation as a matter of national security. As a result, QuoIntelligence expects continued sophisticated espionage campaigns targeting the high-tech sector, particularly the semiconductor sector.

In addition, emerging tech sectors such as quantum computing and self-driving and hydrogen cars could become increasingly targeted. China’s growing focus on its military development and defense expenditure indicates a shift from China’s previous focus on using trade and economics to further China’s interests globally, to also include military power.

Talk To An Expert!