The war in Ukraine, together with the Western response to Russia’s actions, has accelerated and exacerbated the amplitude of the energy crisis because of Russia’s place as the world’s largest exporter of gas, crude oil, and refined products. As the conflict drags on, QuoIntelligence assesses the impact of the war for the European energy sector. Our analysis includes an overview of Russia’s strategy to use gas supply as leverage on the EU, as well as Western countries’ response to the soaring energy prices.

The core of our analysis focuses on the evaluation of the risk the energy crisis manifests regarding supply chains, the redefinition of geopolitical partnerships in relation with energy needs, and the cyber threat landscape in relation with the energy sector.

STATE OF THE CURRENT ENERGY CRISIS AND LATEST DEVELOPMENTS

Since the start of the war in Ukraine gas prices have rocketed to unprecedented levels, while wholesale electricity prices have also significantly increased. The crisis heavily hit the EU because of its dependency on Russian gas and oil exports, which are extremely strategic for the European economy. In 2021, Russia accounted for about 40 percent of the European gas demand and half of Germany’s demand was met by Russian gas.

In reaction to the sanctions over the war in Ukraine, Russia required payments in roubles, halted gas exports to a series of European countries, and alleged the need for repair of the Nord Stream 1 pipeline to repeatedly stop, or decrease gas flow. In July, a Russian court ordered the suspension of the Kazakh Caspian Pipeline Consortium’s activity. The decision was overruled but this incident points to the risk that Russia could try to alter alternative gas export routes to the EU.

Between 26 and 28 September, four leaks were discovered in the Nord Stream 1 and 2 gas pipelines. The EU, NATO and Russia suspect this to be sabotage. Different national authorities have launched investigations into who perpetrated this possible attack. Attribution is yet to be clarified officially and will probably be difficult to achieve. Nevertheless, authorities and experts have indicated that it is probable that state actors were involved given the complexity of execution and preparation of the acts. As a result of the destruction, experts said the Nord Stream pipelines are unlikely to be able to carry any gas to the EU this winter. Overall, the incident showcases the risk for critical infrastructure, especially in the energy sector. EUROPE’S RESPONSE TO THE ENERGY CRISIS

In September, the International Energy Agency (IEA) stated Europe faces “unprecedented risk” of gas shortage and that EU countries would need to reduce their consumption by 13 percent in case of a complete Russian gas cut-off. The IEA also warned that even with gas storage at 90 percent, the EU would face heightened risk of supply disruptions this winter. Moreover, beside Austria, Czech Republic, and Slovak Republic, EU countries’ tank storage capacities are not enough for the whole winter consumption.

Alternative supply sources: Most European countries continue to look for alternative supply sources such as Liquified Natural Gas (LNG). Nevertheless, the IEA warned that it is not enough to just rely on gas from non-Russian sources since these supplies are simply not available in the volumes required to substitute for missing deliveries from Russia.

Numerous countries also increased their investment in renewable energies and hydrogen. At the EU level, the European Parliament decided in July to include gas and nuclear energy in the list of sustainable activities.

The energy crisis is having an impact on organizations, but also on the geopolitical and cyber threat landscape. It is likely to result in energy rationing in some European countries. As energy prices continue to increase, companies could face production halting, particularly energy-intensive industries.

The crisis is also likely to bring societal instability and could result in strikes and demonstrations.

In the cyber sphere, while opportunistic attacks are highly likely to continue to be the most relevant threat to the energy sector, cyber espionage and hacktivist attack are likely to increase following their political component. Below we analyze the aforementioned issues:

Possible gas rationing and increasingly high energy prices to potentially halt production: European countries have designed contingency plans which foresee rationing specific economic sectors first, while households and critical infrastructures such as hospitals would be preserved. As a result, companies could either reduce their energy consumption or curb production.

Potential shut-down of energy-intensive industries, impacting the global supply chain: European energy-intensive industries are suffering twice as much from skyrocketing energy prices as producers use gas both as a source of energy – even more so in Europe where gas regulates the price of electricity – and as a raw material in production. Furthermore, gas as a raw material cannot be easily substituted.

Societal impact: As the energy crisis continues, general discontent will likely grow among the population under the pressures of increased costs of living and particularly energy prices. This could lead to increasingly frequent demonstrations in several European countries against energy companies and governments. In fact, France has been experiencing nationwide strikes across the energy sector since the end of September, affecting refineries, nuclear power plants, as well as hydropower stations. Activists could also increase their activities against the energy sector. Energy firms’ public image could be impacted. For instance, in September, Greenpeace activists blocked shipments of Russian gas from unloading at a liquified natural gas terminals in Sweden and in Finland to pressure governments into declaring an import ban of Russian gas. 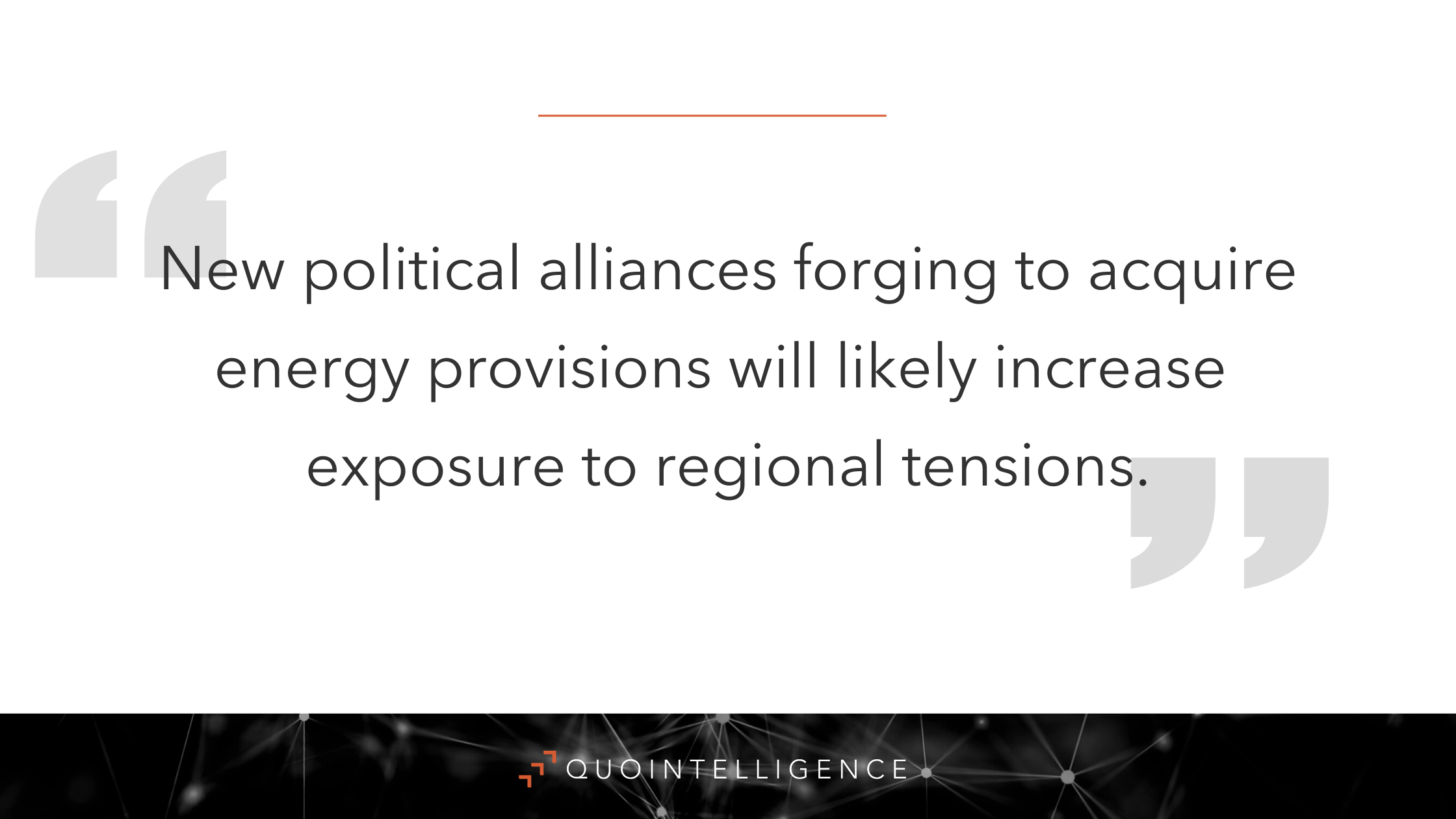 New geopolitical alliances: As countries look for alternative energy providers to achieve greater energy security, they adapt their foreign policy plans accordingly. For instance, the US has tried to reinforce its diplomatic ties with Saudi Arabia. Similarly, the EU signed a supply deal with Azerbaijan in July. The war in Ukraine has enhanced the geopolitical influence of oil and gas producers and accelerated the emancipation of the Gulf states which are now quicker to defend their own interests and less likely to automatically align with US geopolitical objectives.

As major energy providers are usually located in unstable regions, greater dependency on those countries makes energy importers more exposed to this instability. Additionally, new energy deals could have long term implications as in some cases countries are obliged to sign agreements for the next 20 years.

While monetary gain is significant, there is little incentive to disrupt the situation. A notable example of this phenomenon is the statement of DarkSide ransomware group after the Colonial Pipeline ransomware incident saying that it did not want to cause widespread problems.

The current energy crisis exacerbated by the war in Ukraine is resulting in countries speeding up their clean energy goals. As a result, state-sponsored actors could increase their interest in energy companies, to gain access to strategic and sensitive documents. Operations against energy sector entities will likely increase with the aim of gathering information and establishing venues of further access. The most striking example of this type of activity is the operation of the Berserk Bear group responsible for intrusions against organizations in the energy sector since at least 2010. It is important to highlight that espionage operations could provide the capability to move forward with destructive actions.

Following the war in Ukraine, QuoIntelligence has not observed high-profile cyber events related to energy supply disruption like the blackout caused by the 2015 deployment of Industroyer malware. This is likely both due to Ukraine being better prepared and the fact that, compared to kinetic strikes, cyber operations have limited effectiveness. Russian operations targeting industrial systems with destructive intent against countries supporting Ukraine were also not reported.

In March, US CISA issued an alert regarding the targeting of the energy sector by Russian state-sponsored groups. CISA referenced indictments issued by the Department of Justice linking Russian intelligence to the Berserk Bear group conducting targeted intrusions against the energy sector since 2010 and for the deployment of destructive Triton malware, which is one of the most dangerous industrial malware deployed in the wild with the apparent aim of causing destruction of equipment. Therefore, the official attribution to the Russian government emphasizes the threat posed by related activity groups.

QuoIntelligence has observed an increase of hacktivist attacks against energy companies. Hacktivists often have the lowest capability. Operations by hacktivist groups typically include website defacements, DDoS attacks, and disinformation campaigns. Pro-Russia hacktivist groups are targeting key industries, such as the energy industry. For instance, Killnet announced a DDoS attack against the network infrastructure of Energijos Skirstymo Operatorius (ESO), a Lithuanian electricity and gas distribution company. 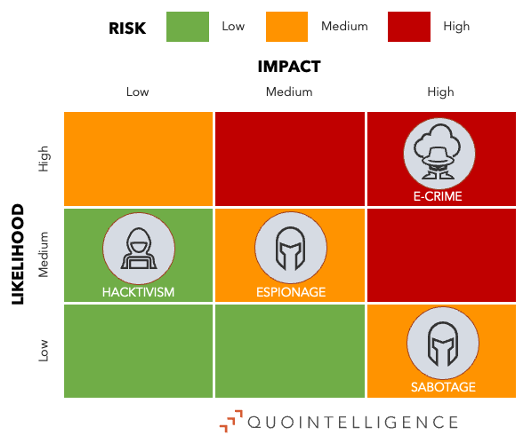 QuoIntelligence assesses that the current energy crisis together with the highly unstable political environment following the war in Ukraine is highly likely to result in increased risk to the energy sector.

The war in Ukraine highlighted the need for European states to conduct strategic changes in their policies to ensure energy security. However, this process will take time and pose further challenges for the EU.

Likewise, the energy sector will highly likely be subject to new policies and increased government interventionism in the next year.

The rush to diversify energy supply sources is altering the geopolitical landscape, favoring the emergence of new alliances with countries producing energy. The risk is to shift from one dependency to another.

The energy crisis is also putting significant pressure on society and could result in civil unrest and alter energy companies’ relations with their customers.

The energy crisis will highly likely reflect in the cyber threat landscape. While eCrime actors constitute the major threat to many economic sectors, including the energy industry, energy companies are also exposed to cyber espionage, more silent but nonetheless threatening for critical operations and sensible research and development projects.

QuoIntelligence uses phrases such as we judge, we assess, and we estimate—and probabilistic terms such as probably and likely—to convey analytical assessments and judgments. Such statements are not facts, proof, or knowledge. In addition to conveying judgments rather than certainty, our analysts’ estimative language also often conveys our assessed likelihood or probability of an event.