US Sanctions Against Russia Unlikely to Limit Russian Cyber Espionage

The US recently imposed punitive measures against Russia, including financial sanctions and diplomatic expulsions. The sanctions are in response to the SolarWinds espionage campaign and Russia’s alleged interference in the 2020 US Presidential elections.

The US sanctioned a total of 32 entities and individuals. It also set new restrictions on buying Russian sovereign debt and designated six Russian technology companies that support the Russian Intelligence Services’ cyber program. Moreover, the US will expel ten Russian diplomatic personnel from the US.

In a hurry? Check out the infographic for the most relevant information on the topic!

To counter Russia’s moves in cyberspace, the White House announced further steps to promote a framework for responsible state behavior in cyberspace. They also outlined a set of actions to improve US cyber defensive capabilities and resiliency.

Poland and the Czech Republic also expelled Russian diplomats in solidarity with US sanctions. NATO, the UK, and the EU also joined in, publicly supporting the US. In turn, Russia continued to deny its involvement in the cyber campaign and retaliated, sanctioning US officials and expelling US, Czech, and Polish diplomats.

While the US previously sanctioned Russia, past sanctions mainly punished election interference and disinformation campaigns. The most notable example was the US sanctions on Russia for its interference in the 2016 US elections. They also sanctioned Russia for attacks against critical infrastructures, such as the NotPetya cyberattack affecting Ukraine’s power grid back in 2015.

However, past US administrations largely refrained from retaliating for cyber espionage. Despite the efforts of governments and international organizations to create a code of conduct for acceptable behavior in cyberspace, espionage as such is not illegal. In addition, the US and other western nations also participate in such activities.

The difference in the case of SolarWinds could lie in the broad scope and scale of the cyber espionage campaign. It carried the potential for network degradation and had a significant impact on the private sector. Given this new precedent, sanctions on nations carrying out cyber espionage could become more frequent.

However, the main issue is that sanctions on Russia have failed to deter the country in the past. Therefore, the newest sanctions might not deter Russia but likely exacerbate tensions between Russia and the US. 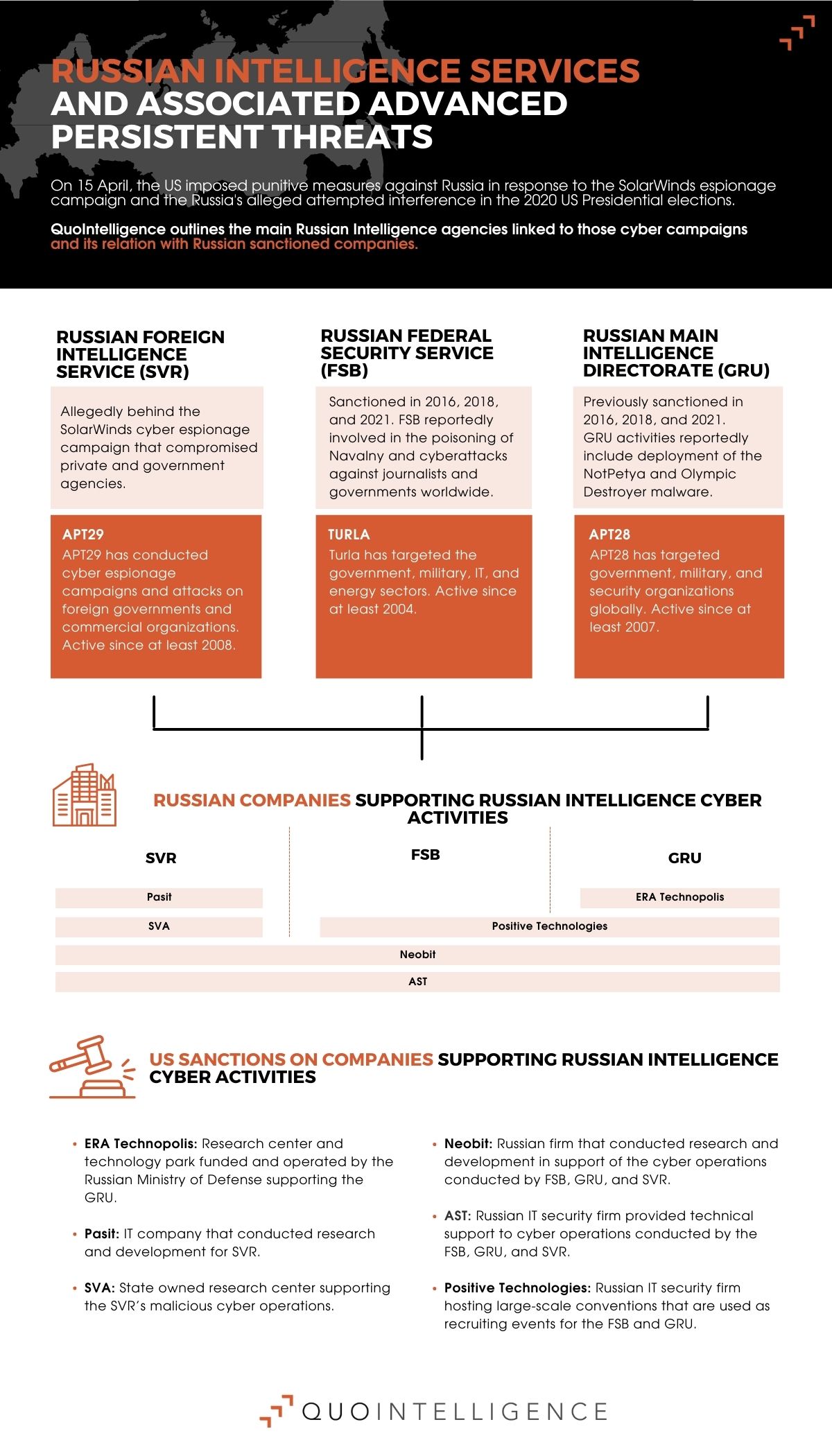 As tensions are likely to manifest in cyberspace, QuoIntelligence provides an overview of the key Russian Advanced Persistent Threat (APTs) groups, including targeted sectors and Tactics, Techniques, and Procedures (TTPs).

The following APTs are reportedly connected to Russian intelligence services:

Active since at least 2008, this cyber espionage group is allegedly responsible for attacks on foreign governments and commercial organizations. Their targets were mainly in the US and in the UK, Netherlands, and Norway. The US administration alleges that APT29 is an associate of the Russian Foreign Intelligence Service (SVR) and responsible for the SolarWinds espionage campaign.

Active since at least 2020, QuoIntelligence had first classified ReconHellcat after discovering a new, targeted campaign in August that delivered the novel BlackWater malware. The attack used state-of-the-art techniques, such as DNS over HTTPs (DoH), and targeted at least the defense and diplomatic government bodies in Armenia and Bulgaria.

In January 2021, we detected a new malware, which we dubbed BlackSoul. It shared multiple similarities with ReconHellcat.

Based on the advanced TTPs and the discovered targets, we classified the threat actor as an Advanced Persistent Threat (APT) group. In addition, ReconHellcat shares similarities with APT28.

In August 2020, we detected an ongoing APT28 campaign, which revealed correlations with a ReconHell/BlackWater attack.

APT28 delivered the Zebrocy malware in the campaign and used an upcoming NATO training as a lure.

The campaign targeted NATO members and at least one government body in Azerbaijan.

Since at least 2014, this APT has targeted critical infrastructure in the Middle East, Europe, and North America. The group has used TRITON malware to manipulate industrial safety systems.

Active since at least 2013, this APT has mainly targeted the Ukrainian government and agencies.

This APT has been active since at least 2011. Berserk Bear has targeted organizations in the US and Germany’s energy, utilities, and telecommunications sectors.

Since at least 2009, the group has targeted the critical infrastructure, government, and IT sector in the EU, the US, and Ukraine.

The US government released an advisory on the latest TTPs leveraged by actors associated with the SVR. While each APT resorts to different TTPs, they share similarities, such as being highly stealthy and achieving persistence in the targeted networks. In the recent advisory, the US government warned of exploitation activity of publicly known vulnerabilities, including in Fortinet and Pulse Secure VPNs.

How Organizations and Entities can tackle Cyber Espionage Effectively

QuoIntelligence monitors the threat landscape and geopolitical developments for both organizations and public entities. We leverage the latest AI technology to detect potential espionage motivation early on and forecast likely future outcomes.

To track threat actor developments worldwide, we continuously update our knowledge base and threat actor catalogs. Therefore, our clients stay ahead of their operations at any moment.

The catalog entries include descriptions of past and current activities, the groups’ motivations and intentions, and up-to-date information on their TTPs, which are mapped to the MITRE ATT&CK Framework to enable automatic detection and tagging efforts, and more! 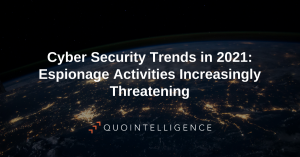 Curious about the topic? Read our complete analysis on the increasing threat of cyber espionage campaigns!